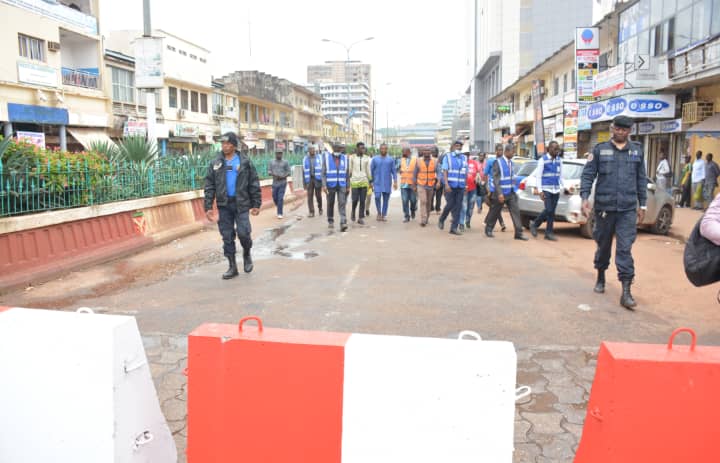 YAOUNDE: WHY AVENUE KENNEDY HAS BEEN PARTIALLY BLOCKED FOR ONE YEAR NOW

One of the busiest streets in the city of Yaoundé – Avenue Kennedy has been partially sealed off from cars and motorbikes for a year now. The move was carried out by the Yaoundé City Council in late 2021, and has since remained standard.

Shop owners at the street, city dwellers and hawkers who frequent the street have raised worries over the move, noting that it makes circulation and business difficult. City officials however, believe the move will in the long run, change the face of the town, and benefit all stakeholders who utilise the stretch in one way or the other.

“The City Council with the help of development partners, in particular the French Development Agency, placed pollution sensors in certain areas of the city of Yaoundé… it was found that the area of ​​Avenue Kennedy is the most polluted in the city of Yaoundé,” revealed the Yaoundé City Mayor, Luc Messi Atangana. The pollution level, he stated, was noticed to be seven times more than the acceptable average, a situation addressed by minimising the circulation of cars on the said stretch. In addition to limiting movement, the City Council, he added, is raising awareness among locals and encouraging walking as a means of reducing the pollution.

“The City Council has built the Ongola Market which is right next to the Central Market of Yaoundé… In this Marche Ongola, there is a space reserved for street vendors from Avenue Kennedy and I had made the street vendors aware… there will never again be street vendors on Avenue Kennedy,” Mayor Luc Messi Atangana reiterated last October 12 when he visited the stretch. This, he said, is a way to curtail the “inconvenience these street vendors create in this area, ranging from theft, to robbery and other bad practices.”

To execute the Mayor’s instructions, elements of the Department of Urban Order at the City Council accompanied by the forces of law and order patrol the street often, confiscating products of any hawkers found there. They also ensure that the blocked lane remains unused by car owners, and that commercial motorbikes do not defy circulation limits.

FINAL FIGURES OF YAOUNDE LANDSLIDE SET AT 15 DEATHS, AND 4 SURVIVORS 0