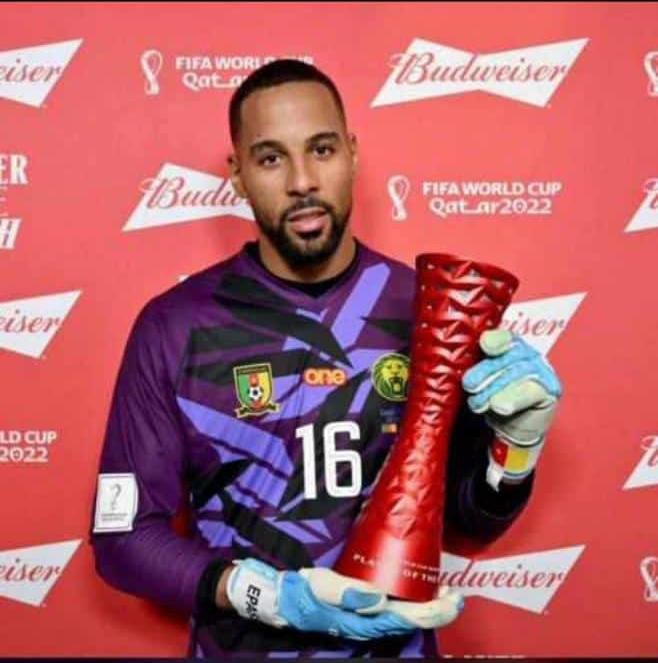 We were all witness to a beautiful Brazil vs Cameroon football encounter yesterday. If anything stood out aside from the much-celebrated win, it was goalkeeper Epassy’s performance, you didn’t need to be told he was doing well at his post. Each save was celebrated like a goal because we had already tasted his disappointing performance and obviously didn’t expect anything big.

From a much-criticized performance against Serbia to an awesome step-up game against a highly dreaded Brazilian side. He kept it tight till the end and not just in an ordinary way, 7 saves, 9 recoveries.

After conceding 3 goals against Serbia, he was heavily criticized, and Cameroonians were frustrated by the simple thought he was the goalkeeper to be used against tough Brazil. The match against Brazil was a second chance not to be joked with and he did exactly that.

Many of us will say it was fated, it was God, it was luck. Perhaps, given it was Brazil team B, so he had the chance but still it was Brazil which meant it wasn’t any easier. We might still say his poor performance in the Serbian encounter was a part of fate’s grand plan to set him up for a highly sought brilliant performance, but still personal effort/performance had a key role to play without which he would be probably trolled and sidelined henceforth.

And there he was, ready, steady, focused and confident. He kept a clean sheet to the Suprise of everyone, emerged man of the match and that can’t be attributed to fate or luck alone.
Most of us pray, cry, probably even hustle for such opportunities but are we always ready?

Epassy’s story is one of using your chance and using it well. Most of us don’t lack opportunities, we lack what is needed to grab those opportunities.

If Epassy wasn’t ready, he would’ve lost it all in that match. We do not know what the future holds for him, but we definitely know it is promising If he keeps doing the work.

Having an opportunity is one thing, keeping it is another. Fate, God, luck will bring opportunities your way. Hard/ smart work gets you there, the same work will keep you there.