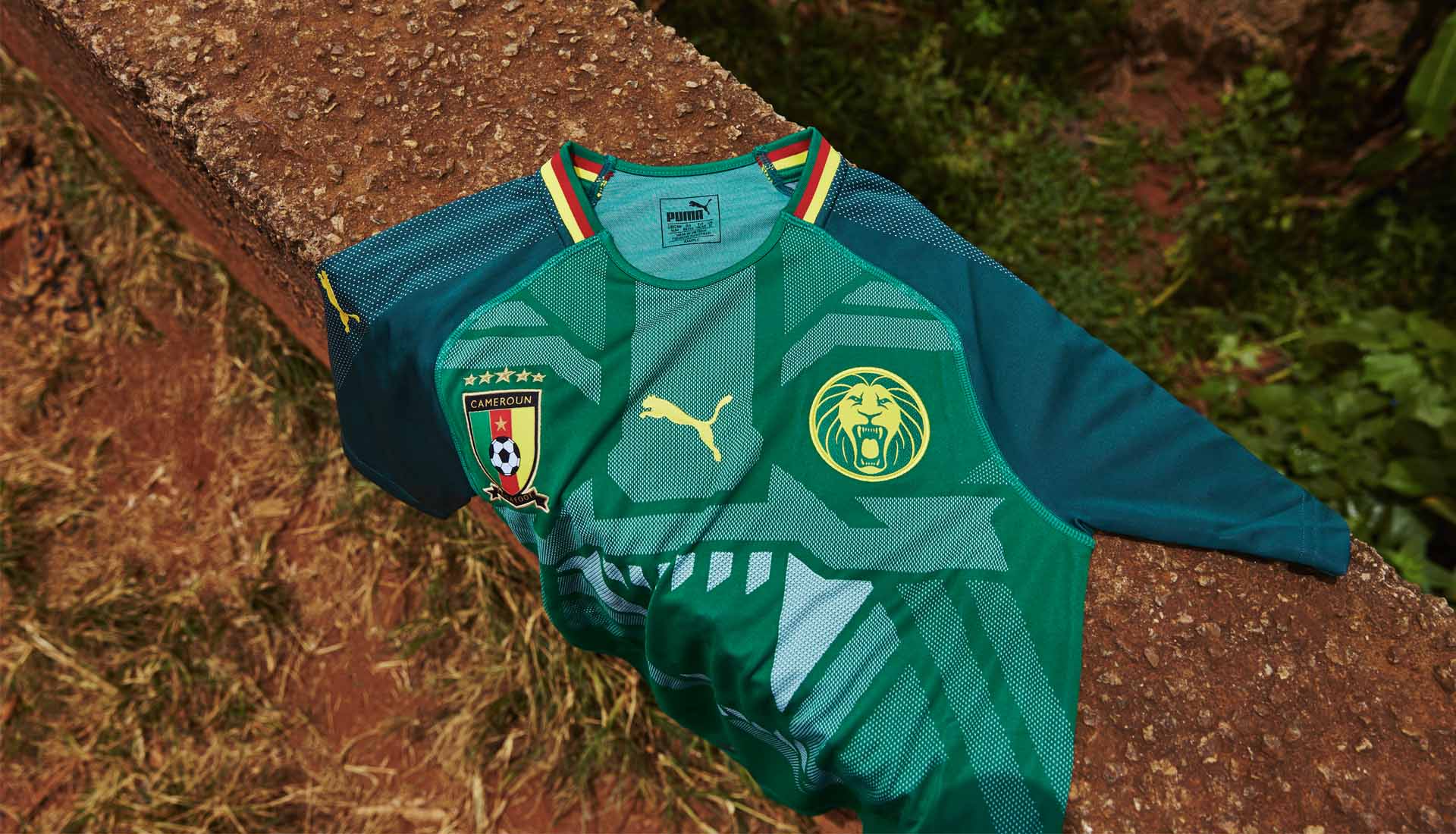 THE RACE TO DRESS/EQUIP THE LIONS: WHO IS GOING TO WIN?

With all the economic and socio-political issues in Cameroon today, many hate the fact that football seems to come and put all that to the back burner. There is however no denying that when it comes to international relations, many countries know Cameroon through football. In my travels, whenever I meet random people and tell them I am from Cameroon, they will either call the name of Roger Milla if they are aged or  younger people will call Eto’o. Between upsetting wins in international competitions, Milla’s NFT worthy goal celebration, Marc Vivien Foe dying in the line of duty, and Eto’o’s stellar career in Europe — Cameroon has written many interesting pages in the football almanac.

Cameroon’s football history making streak has not always been in gameplay. Cameroon joined the list of teams with banned kits in 2002. Many teams would not be proud of making that list. Teams like Fiorentina whose 1992-93 season away kit was banned for a design that had a recognizable Nazi swastika. Cameroonians, however, will remember their banned kits as a case of ‘too cool for school.’

The aesthetic history of Cameroon has been linked to PUMA since 1997 and in the course of the 20 year collaboration, which ended in 2019, there are several episodes on the edge of reality. The first dates back to 2002, with the launch of the new jersey for the Africa Cup that Cameroon won in Mali. The sleeveless jersey was a variant never seen up to that moment. Cameroon was able to use the kit for the AFCON which ran from Jan 19, 2002 – Feb 10, 2002. Later that year in May, FIFA was not happy when the team showed up with the same kit design at the  Japan-S.Korea World Cup. The official justification by FIFA was the inability to attach the tournament patch on the sleeves. Cameroon still wore the same shirts—but with black sleeves under their “vests” in protest.

PUMA joined Cameroon in the protest convincing Serana Williams to show support for the Cameroonian national team by wearing a custom tennis kit inspired by the same controversial jersey Cameroon was wearing at the World Cup during her opening two matches at Roland Garros tournament that was going on at the same time. Speaking on the event, Serena said “Since I always wear sleeveless things, Puma came up with this idea for me during the French Open to wear the Cameroon outfit, which is really exciting. I was reading an article where it says that Cameroon is everyone’s favorite team,” she added. “[Even] if you’re supporting England, a lot of people have this love for Cameroon because they’re always fighting so much it seems. They’re the best African team.”

Cameroon will get on the list of banned kits for the second time in 2004. After the sleeveless shirt of 2002, Cameroon in 2004 launched with PUMA a sort of “onesie.” The unique piece is another 1-of-1 design, never seen before, and FIFA reacted with much more force than two years earlier. Immediately after the 2004 Africa Cup of Nations match against Tunisia, Sepp Blatter legislated on the new kits, stating that “all shirts and shorts must be separate items of clothing“. Cameroon will continue to play with that uniform, ignoring the new rule. Cameroon wore the kit until their elimination in the quarter final against Nigeria. The Indomitable Lions were handed a $154,000 fine and docked six-points from their 2006 World Cup qualifying group. PUMA paid the fine despite disputing the punishment with FIFA. Several months later both parties agreed to settle out of court – with FIFA finally restoring the six points they had stripped from Cameroon’s qualifying tally.

Pride is in the DNA of the average Cameroonian. So proud that we made the winners of the 2022 AFCON feel inferior to our 3rd place Lions. Back to back controversial kits further show the defiance that comes with Cameroonian pride and PUMA was right there in character. PUMA was founded in conflict by Rudolf Dassler who didn’t want to continue working with his brother Adi Dassler in their shoemaking business. Rudolf will split to start PUMA while Adi started Adidas.  PUMA was basically built on ‘I’ll go do my own thing’ —  the marriage with Cameroon was one definitely made in heaven. It was a classical case of birds of the same feather flocking together.

Going through those moments of trial together only served to cement the relationship between the two brands. It was with dismay that many Cameroonians received the news that the relationship with PUMA was over. The twenty year contract will not be renewed by then president of FECAFOOT, Seidou Njoya who Eto’o fought hard to kick out of the federation. Under Njoya, French company Coq Sportif will become the official kit supplier for the Lions. This new partnership was not appreciated by Cameroonians who found the French designs boring and uncharacteristic of the extraordinary nature of the Indomitable Lions. Njoya, according to many Cameroonians, is an administrator with no head or even a foot in Cameroon’s football culture.

It’s been about two weeks since the incumbent president of FECAFOOT, via a press release, informed Le Coq Sportif that they will no longer be in charge of equipping the Lions and Lionesses. A press release from Coq Sportif made it known to the public that Eto’o took that decision to terminate their contract without consulting them. Knowing Eto’o and his modus operandi, one has to assume that he found the deal between Le Coq Sportif and FECAFOOT, that showed PUMA the door, to be one that was taken not in the interest of the  federation and the team’s culture but rather to benefit some people. Otherwise one would have assumed he would meet with them to discuss how they could bring back the life that was once in the kits. Since he himself is no angel, maybe he’s also just trying to work with his own people. Who knows?

Whatever the case might be, we have seen calls by many that Eto’o should use a local kit maker. There is no short of designs popping up on the internet. Every Tom, Dick and graphic designer is also trying their luck — hoping to maybe become the next designer of the Lion’s kit. I have a fashion brand that does sport wears and I had people tagging us in posts that are meant to draw Eto’o’s attention to the local manufacturers that can do the job. Every time we have been tagged, I made made sure to tell the people tagging us that meanwhile we appreciate that they believe that much in us, we are in no way qualified to equip the national team, and we are not even close. As someone who is in the industry, I can say for certain that there is no Cameroonian brand or company that is capable of doing that. If the contract is given to a Cameroonian, all  they will do is go to china.

Since Eto’o took over FECAFOOT and terminated the contract of the foreign coach giving the job to Song, stating that he wanted Cameroonian football affairs to be run by Cameroonians, many are hyped. It is that hype that is causing all these calls for local sports wear makers to be given a chance. You have people on canva cranking out designs and it is becoming ridiculous.  The best Eto’o can do is put a clause in the contract that stipulates that a Cameroonian designer be on the design team in whichever company gets the contract and that will still be a stretch.

If Eto’o wants a future where Cameroon’s kits are manufactured by a home based company, that future will be very far away. Even France uses Nike which is an American company. Which begs why we let a French company that is not even deemed worthy to equip their own national team equip us. In typical Cameroonian pride, we can do it though; show up with jerseys that don’t fit comfortably and tell the world to support their own. We can do it and deal with the mediocrity if we are engaging the whole nation into a transformation movement that will see us completely self reliant a la Thomas Sankara style. Stop dreaming.

NUDITY AND VIRAL INTERNET CHALLENGES: WHERE DO WE DRAW THE LINE ON PERSONAL RESPONSIILITY?