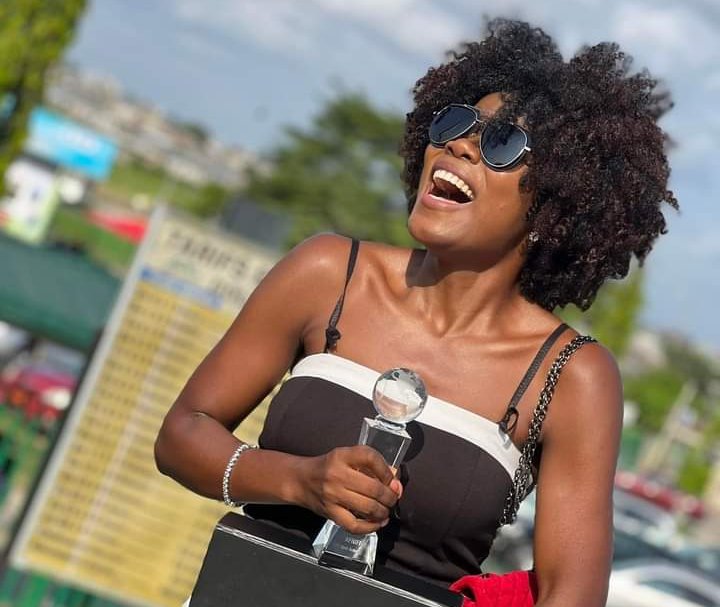 Cameroonian actress, Nimo Loveline is still basking in the glory of her win at the 2022 Africa International Film Festival. She scored the Best Actress in a lead role in feature film for her part in Eystein Young’s Oscar-nominated movie, The Planter’s Plantation.

The Globe Awards came at the end of the Africa International Film Festival (AFRIFF) held in Lagos, Nigeria from November 6 to 11. Nimo was one of many acts in the African movie industry awarded for their works and impact. Also honoured were the likes of Daniel Etim Effiong in “Kofa” [Best male Performance], Bahador Zamani in “Requinto” [Best Director] and Jude Idada in “Kofa” [Best Screenplay].

“Best Actress in a lead role in feature film, I am so honoured,” Nimo who plaed the role of Enanga wrote shortly after receiving her award. Many of her Cameroonian colleagues also took to social media to congratulate her, including The Planter’s Plantation maker, Eystein Young. To him, Nimo “walked right into the hub of African filmmaking and won like a queen.” The Planter’s Plantation being screened

The Planter’s Plantation movie which gave Nimo her award, was named as Cameroon’s pick for International Feature Film at the 95th Academy Awards, otherwise known as the Oscars.

Eystein’s The Planter’s Plantation is a star-studded movie which sheds light on post-independence plantation life in Cameroon’s South West region. The storyline revolves around a young lady who braves the odds to keep alive the legacy of her late father. The legacy, is a plantation he received at the dusk of colonial rule in the Central/West African country.

The cast includes the likes of singer, Loic Sumfor, Stephanie Tum, Nkem Owoh and of course, Nimo. Most recently, it won three awards at the Cameroon film festival, Ecran Noir in Yaoundé.

COULD MULTI-DATING BE THE SAVING GRACE OF MODERN ROMANTIC RELATIONSHIPS? 0