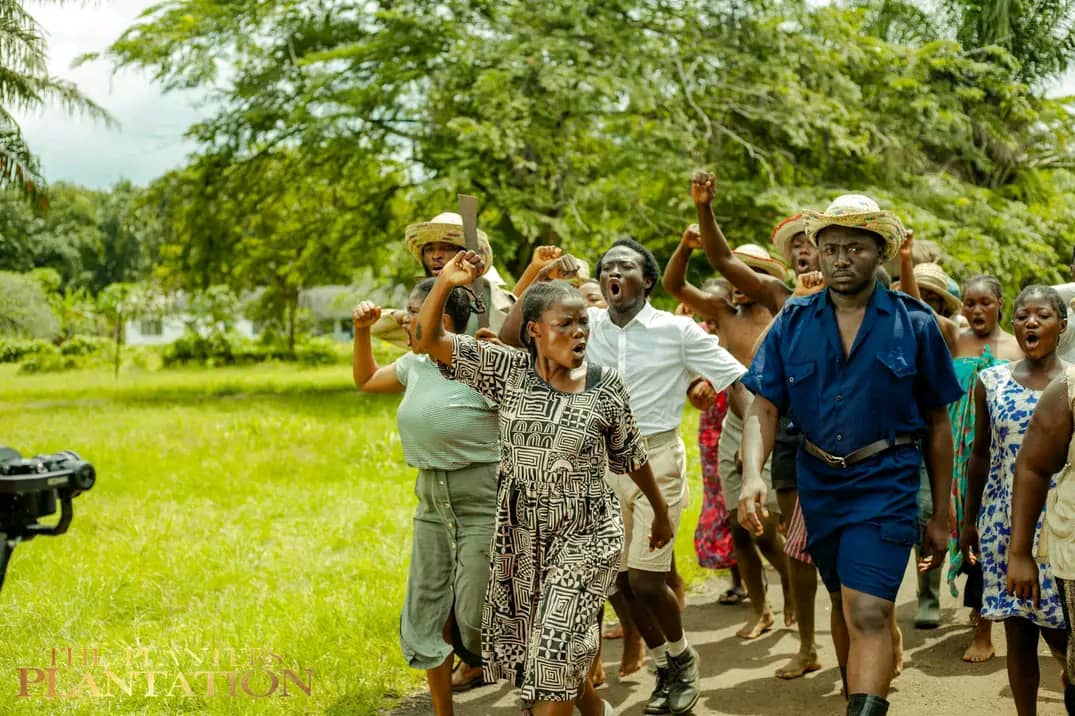 ‘THE PLANTERS PLANTATION’ AS A CALL FOR REFLECTION ON NEOCOLONIALISM

Eystein Young-Dingha Junior, Producer of wave-making Cameroonian feature movie, The Planters Plantation has described the piece as a call for reflection and conversation on neo-colonialist tendencies plaguing the African society.

Eystein made the remark on January 16, 2023 at the Yarha International 1st Film Week in Yaoundé where the movie was aired to the public.

Shot in the town of Tiko, South West region of Cameroon, the movie, he said, possesses an African appeal given its universality of themes addressed. Eystein who presented some of his cast members at the movie show including Stephanie Tum, noted that the depth of the piece was evident even at production, given the toll it took on some cast members.

“The story I wanted to tell is the part that we as Africans played … I’m thinking Felix Moumie, Thomas Sankara, Kwame Nkrumah I’m thinking every African hero that was there.”

The feature movie which too is Cameroon’s pick for the 95th Oscars, Eystein noted, “… is a call for a conversation.”

Citing its somewhat tragic end, he said it was meant to stimulate an important discourse. His desire, was for “anyone who watches this movie to go back with a reflection of where we truly are and where we went wrong and what we can fix right now to make it better for us.”

Despite being an allegory a majority of political and social symbols were accorded a typical immediate post-independence Cameroon. Among the aspects portrayed, was the brutality of the Ahidjo regime, a subject which remains to many, still sensitive to date.

“I knew it was sensitive but I was asking myself ‘what do I want to leave behind for people to carry forward?’” Eystein explained.

“I found my voice and chose to tell it that way. For me it is about impact. Because when impact comes the money will follow. But I wasn’t thinking so much about that. I just wanted to tell this story I felt was important,” he went on.

The 134-minute film will again be screened on Wednesday January 18 at the Spanish Cultural Center, Yaoundé (2 p.m.) and on Friday January 20 at the Sita Bella hall (5 p.m.). The movie centers around a young girl, Enanga battling to preserve ownership of plantation accorded her father at the dawn of independence, by a departing colonialist. Comprised of a Cameroonian star-studded cast, it unveils multiple sub plots uncovering a wider world build on deceit, greed and love.

Barely a year after its release, the movie and its characters have garnered multiple recognitions and awards. Most recently, it was named as Cameroon’s pick for Feature Film at the 96th Academy Awards.

Currently in its 9th edition, the Yarha International 1st Film Week seeks to shed light on cinematic works across the globe, by providing avenues for them to be portrayed to Cameroonian audiences. The 2023 edition is themed ‘why and for whom I film’

With well over 20 different movies being screened, the project has been decentralised across different parts of the city of Yaoundé, to better meet the needs of movie enthusiasts. These include the Yaoundé City Council, the French Cultural Institute, the Spanish Cultural Center and the Sita Bella theatre.

The festival is organised by the YARA association established back in 2013.

Loading...
Newer Post
MINISTER NALOVA THREATENS TO SANCTION SCHOOLS FOR USING CORPORAL PUNISHMENT ON STUDENTS
Older Post
HOW THE DEATH OF A MOTHER IS SAVING THOUSANDS OF CAMEROONIAN WOMEN FROM CERVICAL CANCER

HIDE MY I.D: THE NEW ENTERTAINMENT? 0