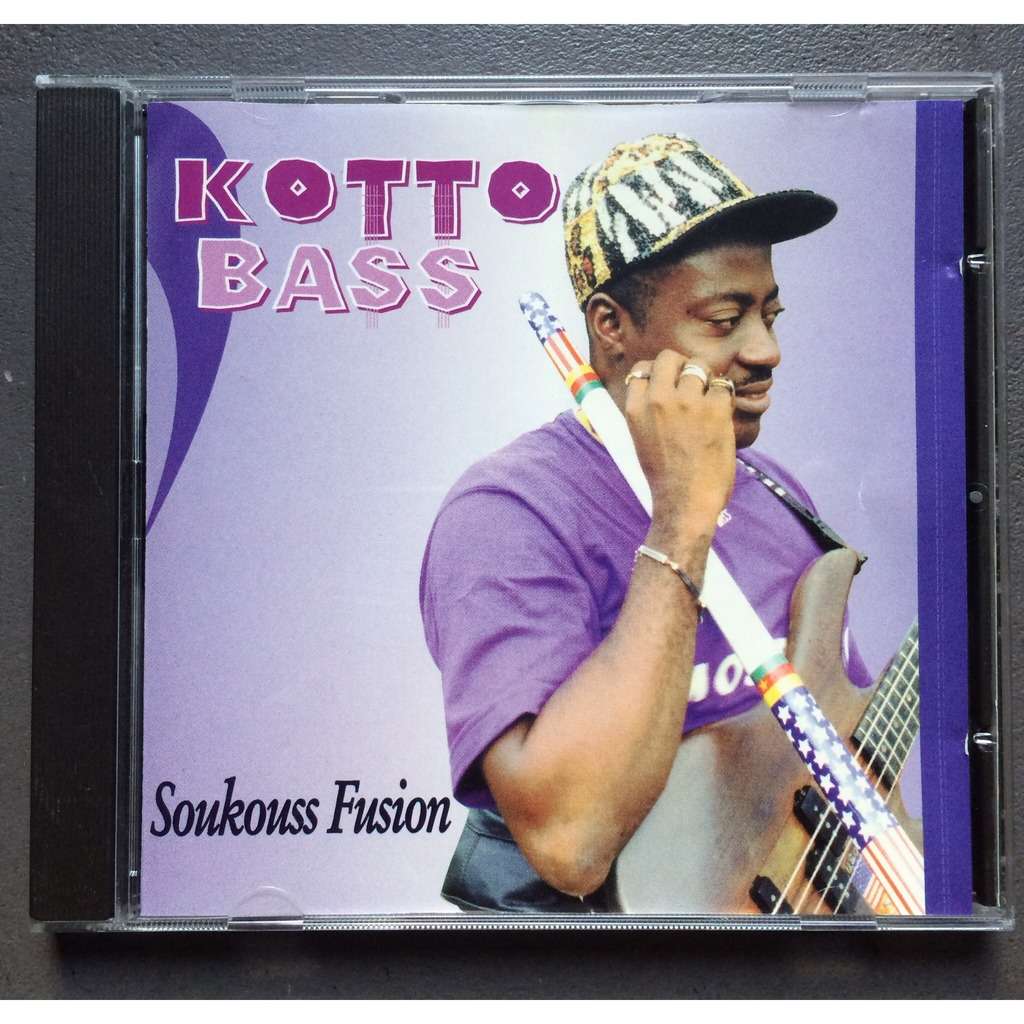 Today we fault our artistes on one hand for “sounding foreign” and, on the other hand, our public for listening to “foreigners” and not “supporting their own”. Kotto Bass over his brief career gave us pointers to a middle way around this dilemma.

On 20 November 1996, Nyamsi Kotto Auger, popularly known as Kotto Bass passed away suddenly following a brief illness at the age of 33. Kotto Bass is widely hailed as one of Cameroon’s musical greats but few are aware that he cemented that fame and legacy with just TWO albums over a solo career that spanned TWO years! What is even more amazing is that half of his repertoire are remixes of old Congolese songs!

The story of his brief career in the public eye begins in 1993, when Makassi Studio recorded a tribute album to Nelle Eyoum. It was a compendium of remixes of Cameroonian standards interpreted by the legends of the day like Henri Njoh, Tom Yoms, Bebe Manga. In this compilation, Kotto Bass – who was at that time, bassist and vocalist at Makassi studios – succeeded to slip in his remix of a Congolese classic: Tabu Ley’s “Ponce Pilate” (released in 1977).

The idea behind the song was to fuse two great African musical traditions: the Congolese Soukous and Cameroon’s Makossa. Kotto Bass’ recipe was to hype up old Congolese tunes by giving them the Makossa basslines and swinging drums that get you off your feet to the dancefloor. It was about giving more appeal to those Congolese classics usually characterized by melancholic guitar solos and borderline depressive vocals.

The “Ponce Pilate” remix was a huge hit with the Cameroonian public and propelled Kotto Bass to instant fame.

The song was so successful that in 1994 Kotto Bass decided to further explore the concept with a whole project around the same idea of putting “Makossa sauce” on Soukous music. This experiment birthed Kotto Bass’ first album: Soukous Fusion. Soukous fusion contained five tracks, including Kotto Bass’ remix of Congolese Classics like Lipua Lipua’s “Nouvel Génération” (1975), and personal compositions like “Edith Ndol’a ngo”.

The success of the first volume of Soukous Fusion naturally led to a second volume, Soukous Fusion 2 recorded in 1996. It was a ten-track album featuring original compositions like “Yes Bamenda” and remixes of Congolese standards like “Infidelité Mado” by Franco and the TP OK Jazz band.

Kotto Bass was set to begin a national promotion tour when he suddenly passed away. He never had the chance to perform “Yes, Bamenda!” at a highly awaited concert programmed for Bamenda.

Summarizing Kotto Bass to his brief two years of fame as a solo artist does not do justice to the suffix “Bass” in Nyamsi Kotto’s name. Richard Bona recounts that when he arrived Douala as a thirteen-year old, Kotto Bass was already an established name in the cabaret circuit whom they looked up to. Long before his public fame, Kotto Bass was an accomplished studio bassist and vocalist: a regular fixture at cabarets like Mermoz. At Sam Fan Thomas’ studio Makassi, he laid the bass riffs of some of the hits that rocked the late eighties and early 90s. His distinctive lines arguably gave the tonal identity of Sam Fan Thomas’ music.

I once told an amateur bassist that a good way to build your chops as a bass player is to study and interpret the Makossa of the 70s, 80s and early 90s. While there are great names in this epoch, I often reference Kotto Bass’ performance on Henri Njoh’s segment in Age d’or as the best resumé of what you need to know about Makossa bass playing and somehow, bass playing altogether.

In that track, Kotto Bass explores the Makossa walking bass technic in the style of Jean-Dikoto Mandengue in the first part; followed by the groovy free-form conversational bass style you would hear in Aladji Touré’s works … he punctuates his lines on the track with licks, chromatic passing notes and a solo that underlines the jazz influences of Makossa bass playing pioneered by the likes of Vicky Edimo and Guy Nsangue. He did it so well that Henri Njoh crooned “Ah….Kotto Bass!”.

Kotto Bass also poured his genius as a bassist and vocalist on the two albums he released, both marked by that unique percussive playing – with notes precisely posed in staccato over the soundscape – and a mellifluous falsetto voice.

Kotto Bass’ successful fusion of genres opens reflections about the current debates on the Cameroonian music scene about “foreign” influence and how much of it we should allow in “our” music. Today we fault our artistes on one hand for “sounding foreign” and, on the other hand, our public for listening to “foreigners” and not “supporting their own”. Kotto Bass over his brief career gave us pointers to a middle way around this dilemma.

First and foremost, Kotto Bass was in many ways an authority on Makossa. As one of his siblings confessed, Kotto Bass could sing the entire repertoire of the Duala Choir, Makôm m’Eses’a Yehova, before he was six years old. Those who have flirted with the cabaret milieu also understand that bass players and instrumentalists in general are expected to master every comma and full stop in every song from the advent of Makossa to the last release of the year.

Therefore, when Kotto Bass remixed old Soukous classics to create his own sound, he did not do so as a mere consumer of a foreign music. He did it with the touch of someone who was first of all an authority on Makossa. That is what gave the magic of the Soukous Fusion in my opinion.

The point I am driving at is that the problem today is not so much the fact that we consume Western, Naija or Ivorian music. The problem is that we appear to be losing ourselves in the process. How much of our own music do we know and master before going out to embrace the world? Do these our excellent break dancers and Shaku-Shaku dancers know how to dance Mbaghalum, Malley or Bikutsi? Can these choirs that interpret Handel’s Messiah with so much precision and pride execute a Lottin Samé canticle with the same gusto? How many of our current artistes would be able to execute Afo-Akom’s pentatonic chants or marry these types of chants with foreign influences?

Today, we may validly ask what is left of Kotto Bass’ experimentation with Soukous/Makossa fusion. The approach was pursued by other artistes, including Marshall Bongo and Papa Zoe, who had collaborated on the Kotto Bass’ albums. Bongo pursued a decent solo career until he “gave his life to Christ”, became a street preacher and left the scene. Papa Zoe put out a few hits blending Soukous and Makossa before falling off the musical radar. I would also cite Ruth Kotto and a household name like Jean-Pierre Essome. More recently, when Hervé Nguebo used to be called Nguebo Solo, his crew “Ktier Show” released an entire album in this genre which was not so successful. Nguebo branched out into Afro Jazz altogether.

All this to say that today we cannot easily point to any artist in view who is fully committed to soukous-makossa crossbreeding like Kotto Bass was. All we have is a few songs that pop up every now and then along those lines like Longue Longue’s “Je ne mourrais pas”, the Daphe-Koffi Olomide collabo or Ghislaine Dimaï’s “On ne vous a pas laissé?”.

Today Kotto Bass rests in peace at a cemetery in Bonaberi that unofficially bears his name. In 2012, his niece Danielle Eyango authored a biographical novel “Kotto Bass comme un oiseau en plein envol”. It recounts the life of the artiste who beat the odds of a handicap – probably caused by polio – and a humble background to rise to fame.

In line with Kotto Bass’ life story, Danielle Eyango set up the Kotto Bass Foundation in Douala in 2015 to assist physically challenged kids from underprivileged backgrounds. In Danielle Eyango’s words “There is a cemetery named after my Uncle…but I believe his legacy ought to be bigger and I am contributing to make that happen”.