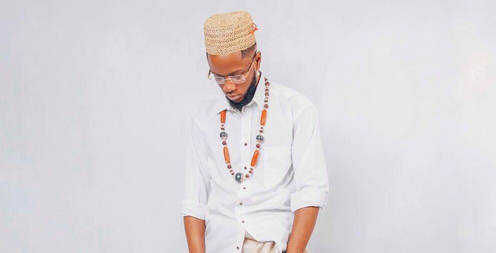 SANGO EDI ON THE PATH OF MAKOSSA

When Sango Edi announced that he had released a single titled Moukanjo back in 2020, the avid music listener that I am did not quite know what to expect beyond what I had been accustomed to expecting; another Afropop song. The Sango Edi I had known hitherto was a producer under the tag name Draeboi. I knew of the numerous productions he had done for other musicians, and of his association with The 808 Nation, a now-defunct collective of musicians and producers.

I listened to Moukanjo after seeing much chatter about it online and I was quite surprised at how good it was. It is not like Sango Edi had not made good music before, but this was markedly different from what he had done for any other person and even for himself.

No doubt the name change marked the beginning of this new musical water he was going to test with his toes. Going from Edi Ledrae to Sango Edi was certainly the very first act of shedding – a mutation from larva to pupa, and Moukanjo was the song the birds sang when this mutation was revealed to the world.

The song ‘Moukanjo’ can be classified under the genre Makossa-Fusion. It has a subtle pop sound weaved easily into a larger Makossa blanket. It is for this reason that although Sango Edi sings the verses of the song with a pop-like approach, the heavy presence of Makossa is still felt. And when the song moves to the bridge and then the chorus, both sung in Duala, the Makossa is embraced further. The breakdown where the second bridge comes in even accentuates this further.

The song is smooth, melodious, infectious, easy on the ears, and subsequently becomes an earworm. And so does the song “O’Dodi”, a personal favourite. With these two singles released just 7 months apart and both having the same formula, it showed that Sango Edi was clearly onto a path that took elements of makossa and fused it with very subtle elements of Afropop. And it works very well. These two songs may not have hundreds of thousands or millions of views but they have deeply marked all those who listened to them. And now the album is here. Engeleh Nye Poh which means “Wait For It” is certainly worth the wait. A wait that will take you into the world of Sango Edi’s vision of, and the ensuing manipulations he brings to Makossa. On the song ‘Molo’ he sticks to the same formula he had for previously-released songs like Moukanjo, O’dodi, or even ‘Kwa La Mba’. Why change something that works, right?

That doesn’t stop Edi from experimenting further with the genre. On Ekouamouato, a song that explores the plight of everyday life and the struggles that abound with it, Sango puts a layer of the distinctive sound of Drill music into it. He does the same on the song ‘Bolo’ a song featuring Mic Monsta, and in which the trap beat overrides, and quite heavily so, any fusion that he could have brought to the song.

Overall, in its compositional palette, Sango doesn’t stray too far from the norm, which is quite ironic because he sort of established the norm with his previous singles. No doubt the one that stands out is “Jamais Vu” with the conspicuous guitar in the background bringing a certain sophistication to the sound. His album may not be as lush in its approach and in its texture as perhaps a “Lion Of Africa” by Mr Leo, and neither is its composition as complex.

It is hard to say if that plays in favour of the overall project or not. From one perspective it gives that charm, that simple beauty and the familiar melodies that make the success of songs like Moukanjo and O’Dodi. On the other hand, it begs the question of whether more could not have been done. The talent of Sango Edi is put into question from the perspective that he seems capable of doing a lot more on this project, and thus the question of why he did not. The overall theme of the album revolves around love and relationships; personal, interpersonal, amorous and with life and its many troubles.

Sango Edi explores this theme through different lenses. It is never superficial and also never too-skin deep; just enough to sing along without thinking too much, but also being in tune with the lesson or story that Sango is trying to impart. The songs do not go out of their way to soldier for anything nor do they preach from a high pulpit. It does not intend to plant the seeds of a movement and is far from advocating any social change. It is not just the proverbial vibes but it is enough to give you something to cogitate on while the melodies and the music transport you in their Makossa –fusion sphere.

All in all, it is a solid body of work, especially one that is on the path of something new and at the same time experimental. It whets the appetite and leaves one expectant for what might come next and how Sango Edi will go further into his experimentations, moving into a more sophisticated realm and giving this genre the full manifestation of its potential.

Sango Edi is walking down the Makossa path. He is just started his way into a long journey that promises nothing but the start of something new for our industry, and we are eager to see what lies at the end of that path.

Loading...
Newer Post
RIGOBERT SONG MAY NOT BE ETO’O’S CHOICE FOR HEAD COACH FOR THE LIONS.
Older Post
OF WHAT USE ARE RECORDS LABELS IN CAMEROON?