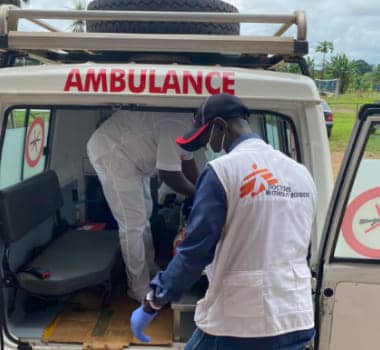 International medical aid body, Doctors Without Borders (DWB) has reiterated its desire for neutrality and impartiality as conditions for work, following the acquittal of five of its staff by a Cameroonian military tribunal.

DWB Central African coordinator, Sylvain Groulx made the remark in a statement on January 10, 2023, days after the final set of the institution’s staff accused were set free.

Five DWB staff were arrested between December 2021 and January 2022 by the state which accused them of complicity with separatist fighters in the Anglophone regions seeking a breakaway state called Ambazonia.

After spending as many as ten months behind bars, the last set were released on December 30, 2022.
“MSF deplores the fact that our staff were forced to endure almost a year of imprisonment which caused untold distress and anguish for them and their families,” the DWB statement read.

One of the detained was released on November 01, 20222 after the Buea Military Tribunal threw out the case for lack of evidence. He had spent ten months behind bars. The others were released progressively in the weeks that followed.

DWB has welcomed the decision, noting that their acquittal is an indication of its clean hands, contrary to multiple accusations of supporting the separatist agenda.

“We are enormously satisfied with the judgement that exonerates our five staff members – and by extension, MSF as an organisation – of any wrongdoing,” said Sylvain Groulx.

He added that “accusing medical personnel for simply doing their job – treating patients infront of them – is simply against all medical and humanitarian ethics and laws.”

The first two DWB arrested were an ambulance driver and a nurse picked up on December 29, 2021 in Nguti, while transporting a patient with a gunshot wound to a hospital in Kumba.

They were accused of complicity with secessionists, the same charge levied against two others arrested in Janaury 2022 and a fifth in absentia.

The institution folded up operations in the South West region in May 2022 after failing to persuade government to release the detained workers. Its absence created a void in the humanitarian sector, with thousands in need of emergency care, helpless.

The move followed an earlier pull out in August 2021 from the North West region over similar differences with government. But with their acquittal and release, the probability of the international medical aid organization returning to the North West and South West regions, is beginning to increase.

To Sylvain Groulx, the negotiation channel with government remains open, but with preconditions. These include DWB being permitted to provide medical health care to every patient in need, with independence, impartiality and neutrality.

THE KEY TO DRIVING CHANGE IN OUR ENVIRONMENT 0