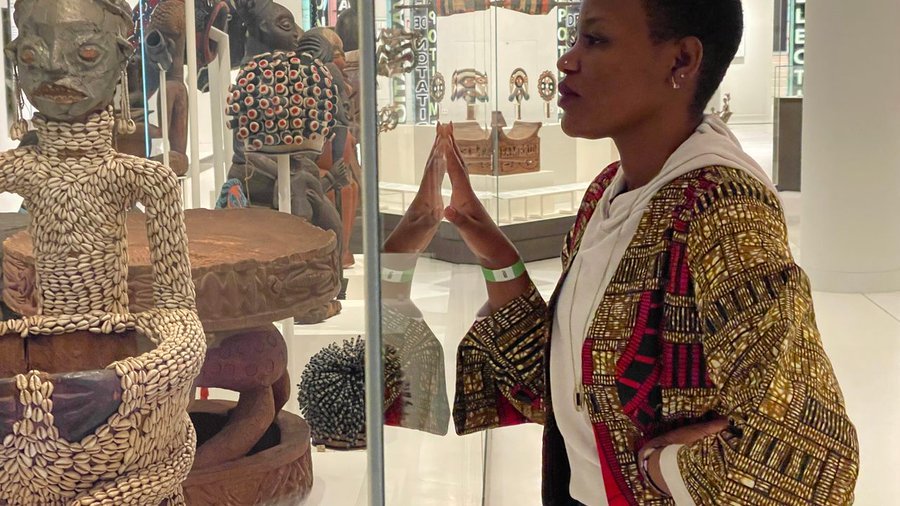 NGONNSO’ IS NOT ENOUGH: CAMEROON’S RESTITUTION ACTIVISTS WANT IT ALL!!

After 120 years, Germany is set to return a looted artefact to the Nso people of Cameroon’s minority English-speaking region. The statue of Ngonnso, founder of the Nso dynasty, one of Cameroon’s 250 ethnic groups was taken away by German colonial administrator, Kurt Von Pavel and placed in Berlin’s Ethnological Museum in 1903.

With growing pressure for the return of looted artefacts to Africa, Germany has not been exempted. As a result, in June 2022, the Prussian Cultural Heritage foundation said it was initiating a process to return the sacred motherly statue. The announcement came as a huge win for not only Cameroon, but the entire African continent which continues to reel in precious items carted away in the colonial days.

Njobati Sylvie, one of the brains behind the ‘bring back Ngonnso’ campaign termed it a first step in what remains a long journey to have them where they rightfully belong. She revealed that plans are afoot for formal conversations with German authorities to chart a path for Ngonnso’s return. “It is within the period when we start having these meetings that we are going to create a timeline. We are going to create a framework for which the restitution is going to happen,” she explained. But the return of the Ngonnso’ and a reparations deal is just the tip of the iceberg. Activists say they want not just the statue, but also its accompanying artefacts. They want it all. Bulami Edwards, an academic and a restitution activist in a recent academic paper, listed some of these accompanying elements without which the Ngonnso’s return will be futile. They include the Royal Cap (ntara’), the Royal necklace (sarkinchiy), the throne, Ivory and more.

“… Isolating an item for restitution is giving the indigenous people false hope. It will be a semblance of instituting a god in a place of worship but withholding the religious regalia and other [props involved in the ritual performance of rites to the god,” He averred. Bulami further likened the ‘incomplete’ return to the Roman Catholic Church Bishop without his pontifical, mitre, pastoral staff (crosier), cathedra, the pectoral cross and the ring.

Concerted action is of prime importance

Cameroon is not the lone country engaged in restoration battles. Nigeria, the Democratic Republic of Congo, Benin and other African states have similar concerns, and European nations are fast losing their grip on the items. Like in sister African nations and communities, Njobati Sylvie believes collaboration is a vital ingredient in the successful return of these artefacts.

Following the Prussian Cultural Heritage’s announcement, a debate erupted over the Ngonnso artefact, who should be at the fore and where it would be lodged once home. While some believe it should be rested at the national museum in the capital, Yaoundé, given its historic importance, others think its only place is home in Nso. They say the Ngonnso is too worthy to be used as a money-making tool, and should be sent into the crevices of the Nso palace, hidden from public view. Fon of Nso next to Ngonnso’ statue during visit to Germany

But Njobati Sylvie believes it is essential to look past conflicting opinions at the moment and put to the fore, the interest of the Nso tribe and the African continent as a whole: “The return of Ngonnso is not just a win for Nso people. It is a win for Cameroon because it is going to be the first restitution case ever in Cameroon. It is also a big win for Africa because it goes a long way to prove that we all as Africans have the right and power to go out there and fight for restitution”.

But the campaign is only as smooth from the outside. Cameroon’s English speaking zone is steeped in a 5-year-long armed conflict and Nso land is no exception. The conflict is rooted in the colonial past and the division of the country between Britain and France after World War One.

The tribe spanning across the Bui division has been among the most affected, and its traditional ruler has even been abducted twice by separatist fighters for siding with the central government in Yaoundé.

Njobati believes the return of the looted artefacts will pave the way for unity and a return to normalcy in one way or another by giving the Nso people and Cameroonians a reason to reflect on their origin and their past. Being a new chip in the puzzle, the return, to her, “will be a reminder that we were a people before colonial boundaries, before the English and French systems of education and law. It is a reminder that we were a people before the divide and rule governance came in. It is a reminder of our culture, our history and who we are.”