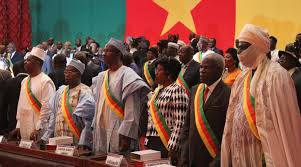 In the build up to the March 12, 2023 senatorial election in Cameroon, women advocates have multiplied calls for an increase in the number of female senators.

They say the rise from the current 26% is essential for giving a better voice to women and girls across the country.

Speaking to national TV, Gender activist and politician, Muma Bih Yvonne said an increase, will be “a political dividend to women who make up 52% of the population of this country.”

To her, the role played by President Paul Biya in realizing this dream, cannot be overemphasized. “The head of state of Cameroon has the latitude to appoint 30 women [as senators]. He should be able to bridge the gender gap,” she noted.

But even in that light, hopes are bleak, as the appointment of females to certain positions of power remains highly imbalanced. In 2018, of the 30 senators appointed by the president, just four were females, a figure suggestive of little change in the weeks ahead.

To Senate Vice President, Hon Genevieve Tjoues however, the strategy, should be that of courage and not submission: “The secret is to look at each man in the face, not to run after men. Politics is not pity. Men don’t give gifts to women in politics so if you can look at men in the face at all levels, you can do politics and reach the summit.”

While advocates seek diverse means to raise women numbers in Senate, there are those who hold the opinion that the gender fight could easily become a distraction from other pressing matters. One of those who expressed this assertion, is lawmaker for Bamenju, Bafut/Tubah Constituency, Hon Agho Oliver.

“It is a level ground for everybody. And even though the United Nation convention on the inclusion of 30% of women into politics is not a gift you have to work hard,” the CPDM politician explained

In a few weeks’ time, Cameroonians would see the results of ballots to be cast by an estimated 15,000 councilors across the country. Beyond the gender question however, many continue to question the wide domination of the political landscape and the possible negative consequences it harbors for Cameroon’s democracy.