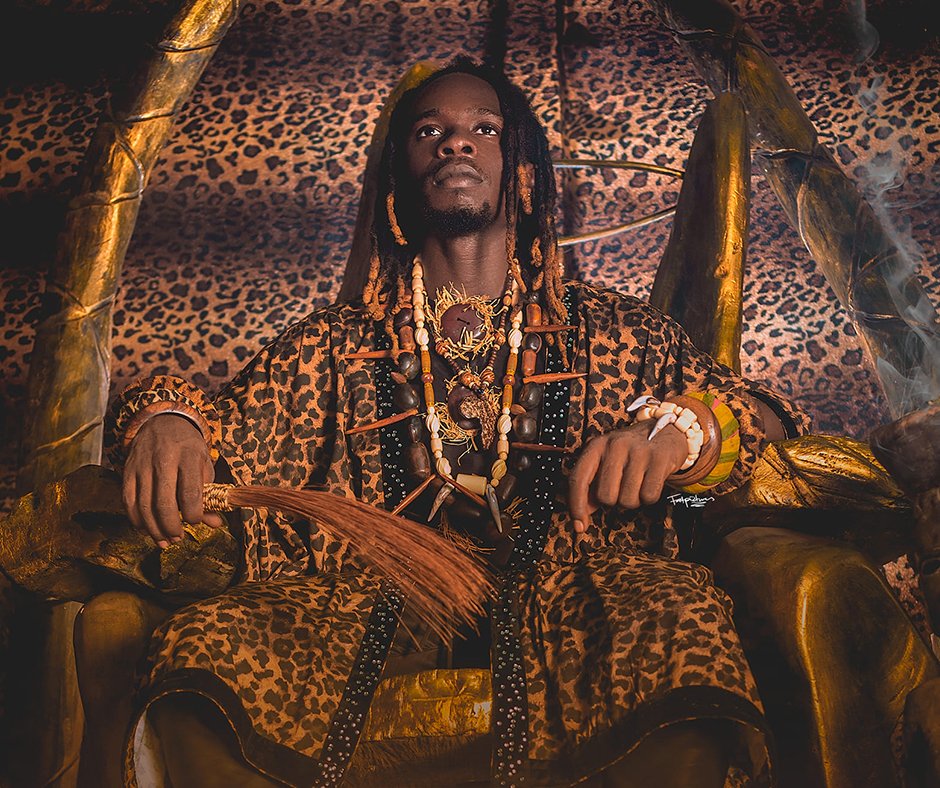 LION OF AFRICA IS A MAJESTIC DECLARATION OF MUSICAL SOVEREIGNTY

When Mr. Leo released the music video for “Time” in September 2020, it was a subtle announcement; a quiet purr from a remote corner of the pride lands that was taken to the river and beaten by a semi-torrential protest in the form of a crowd of unsatisfied fans who were expecting another generic hit Afropop song they could gyrate to. Very few, if any at all, suspected the deluge that was about to erode their expectations.

The song “Jei” came six months later to confirm what few had given thought to, and this time it came with a roar from Pride Rock that every being in the forest heard. It announced a clear change in the musical direction of the one who had been a protracted cup-bearer of Cameroon’s own distinctive brand of Afropop.  “Jei” sets the stage for what is now embodied in the work of art aptly named “Lion Of Africa.” Leo, after all, is an astrological sign that is represented by a Lion.

Is this new musical direction for the long term or is it for showmanship? Is it bouncing off an ardent desire for reinvention, floating adrift from the open sea that is now the Afropop movement? Or is it an intentional quest to prove to himself that his artistry can go beyond the confines of what he had hitherto limited himself to?

What is certain and is fact is that this is a finger to the lips of the many naysayers who had rebuffed him cynically on the heels of his proclamation on social media, after the release of Burna Boy’s “African Giant,” that he was equally as good.

‘Lion of Africa’ is here now and this work is more than just another roar. It is more than a Simba being held by a Rafiki for everyone to see. This artwork is not a dewy-eyed cub prancing around in the pride lands. This artwork is Mufasa; loud and proud, commanding in its stature, and certain of his dominance and of his sustainability.

The album is surprisingly modern and fresh. Sung exclusively in Lamnso and English, it opens with “Ji,” a song with an overarching theme of love and celebration. Leaning on heavy percussions and a smooth rock guitar, it reminds us of the beauty of Africa and how the daily toils and the triumphs thereof are also a reason to celebrate.  Mr. Leo’s signature voice rides this melody with ease and it is complemented nicely by Necta’s perfectly pitched chants.

The album continues with this métissage of rhythms with the kora opening the very first notes of “Jei Jei,” and with the blues guitar on “Yo” standing out as the primary colour against the palette of the many other instruments that paint the song’s sonic portrait. Almost every song on the album has an instrument that dictates its pace and its texture.

Lion of Africa is a body of work that is very well put- together. It progresses nicely with the first part of the album carrying the nostalgic feel of the itch of a half-healed wound. It is almost an ode to some of the patron saints of west Africa’s ethnic music firmament -Salif Keita, Cheick Tidiane Seck, Mory Kante, or Ismael Lo. Songs like “Jei Jei” and “Leey” exude the same unforced, griot-ic spiritual essence that feels transcendental and is layered with a tinge of supernatural veneer.

The second part of the album is more hip and experimental. It is also like an origin story for Mr. Leo whose love for reggae and dancehall music is well-documented. It opens with the song “Yo” which has a blues guitar dictating the feel of the song against a background drum line that is reminiscent of Manish Waters “Muddy Boy.”

“Njong” features a rap verse from Wan Shey and is a blend of hip-hop and dancehall. “Wan” rides on the melodies of soft pop, accentuated distinctly by the acoustic guitar and the grand piano. “Hosanna” is distinctly South African with a mutant Kwaito and Amapiano feel to it.  “Viberi” is a full-blown Reggae song both in its rhythm and even in its thematic – a veiled cry for good governance under the cloak of a homage paid to those who have died in the fight for justice and peace.

The progression is unforced and intentional. One easily slips through the cracks. There is a whispering familiarity that is hard to describe; almost as if one is a supernatural being moving between two different but also strongly familiar realms, each one sheathed by a melodic, endorphin-infused resting place.

Perhaps where the album falters is in the general thematic it evokes. For the Lamnso-untrained ear that picks up the bits of English sprawled here and there, the over-familiarity of the themes of motherland, love, and humanity could seem overplayed. One could say Mr.Leo is running along the path of what is codified in the constitutional blueprint for the African singer who wishes to export themselves beyond familiar shores.

Those issues are still real and relevant nevertheless, and are an indelible scar cutting across the face of the continent. But they hardly qualify as progressive themes for the new imagery that a juvenile African population, torn between conservative African values and imported left-leaning tendencies, are willing to be identified with and claim loudly.

That notwithstanding Mr. Leo tackles relevant issues in a world that many will qualify as increasingly materialistic, self-serving, and selfish. A little more love won’t hurt after all and what he does is tile the floor set for a more harmonious society hoping to give it a more polished finish.

What Mr. Leo has done on this project is indeed a master class. It is a lamp unto the feet and a light onto the path of the many colleagues of his generation who wish to take themselves seriously as musicians and artistes.

Not since a certain “Mboko God” has an album been this well-planned and executed in its musicality, in its arrangement, in its texture, in its singularity, and in its essence from any artist of this urban music generation. Mr. Leo puts a seal on the proclamation of what is to be done and what is expected.

Mr. Leo roars loudly on this album. The Lion of Africa is certain of its place in the hostile ecosystem it inhabits, and it is to be taken seriously.

THE CASE FOR SOCIAL CAPITALISM