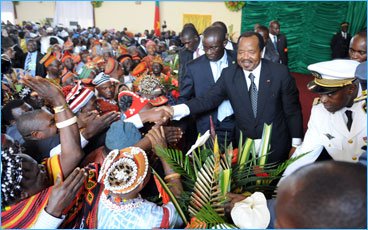 “IF YOU LIVE IN YAOUNDE, ARE YOU A FON?” NORTH WEST FONS UNION PRESIDENT CHIDES PEERS

Fon Teche Njei II, traditional ruler of Ngyen-muwah and President of the North West Fons Union (NOWEFU) has urged his peers fleeing their palaces to return home and make peace with their subjects. According to The Guardian post newspaper, the traditional ruler made the call in a series of declarations during a memorial ceremony in honour of Fon Amungwafor II in Bambui, Tubah subdivision, Mezam division in the North West region.

“For the interest of the traditional institution of the North West region,” he said, “I want to appeal to the Fons of the North West especially those who are out of the region to come back to their Fondoms because they can better manage the crisis if they are with their people…”

Since the Anglophone Crisis turned violent, traditional rulers have been victims, with some abducted and even tortured. In the North West like in the South West, many have fled their palaces, in a bid to stay safe from the scourge of separatist fighters who accuse them of siding with government.

To the North West Fons Union president, running will never be a solution to the predicament. “It is good to face the bull by the horns. I don’t think that a Fon who does not have issues with his people can be attacked… When you go to other subdivisions, most of the Fons live in Yaoundé. If you live in Yaoundé, are you a Fon?” he quizzed.

On his part, Fon Amungafor III of Bambui whose predecessor’s memorial ceremony it was said peace was a necessary ingredient for the return of traditional rulers. Citing the case of his territory of administration – Bambui, he said some quarters are painting his community black.

“It is thanks to our forefathers that there is relative calm in the village today. So, my message to the people is that they should remain peaceful,” he stated.

Many have expressed dismay with traditional rulers gunning for political positions and leaning on government to survive. In the wake of the Anglophone crisis, the situation has left a wide divide between subjects and their rulers whom they believe in most cases, have ‘sold’ them out to the state.

In September 2022, Fon Bahbi Mathias Nju III threatened to lay curses on separatist fighters. “Curses will be the portion of all those who have taken up arms against Cameroon … our ancestors will be sent behind them,” he had stated.

Like his peers however, his words were met with discontent from locals. Many took to social media to call out the traditional rulers for thinking about themselves and not putting the local population first.

A similar scenario had been observed when the Fon of Nso took part in the 2020 regional elections, defying separatist fighters who had abducted him a few weeks earlier. Following his release, many of his subjects had urged him to stay out of partisan politics and cater for the affairs of his land.