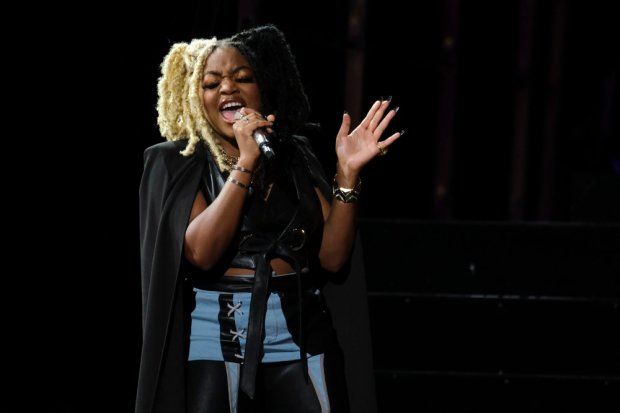 I AM FROM MINNESOTA – LIBIANCA

Despite giving a shout-out to Bamenda in the opening lines of her hit single, Libianca, in an interview with RollingStone magazine, claims her Americaness which she got by birth before her Cameroonianess which she inherited from her parents. The average Cameroonian would love to go past the technicalities and just call her a Cameroonian but for the purpose of this article, we must take her seriously when she says, “I am from Minnesota.”

The Afrosoul singer has been the talk of the town in Cameroon. After decades of having no presence in the international music scene, Libianca comes as a savior. Usually, we see upcoming artists cover a popular song as a strategy to get discovered but for Libianca, established artists like BNXN aka Buju and DAX are jumping on her wave.

As a nation starved of accolades, many Cameroonians would love to own the full bragging rights on her name. With her success, many young artists have their hope renewed. They now have her as evidence that they too can soar on the world’s most prominent music charts. The question is – is Libianca just like any other upcoming Cameroonian artist that caught a big break? The simple answer is NO.

Libianca has a very long music journey even though she is only 22. That journey includes a tenure on NBC’s The Voice where she had America’s country music legend Blake Shelton as her coach. Her life prior to being on The Voice includes periods of professional vocal lessons and being signed to a record label around the age of 15. She plays the guitar and is also a sound engineer, grading herself a 9.5/10.

At the age of 22, her knowledge of music is arguably above that of the average artist in Cameroon today. Her journey has definitely taken her to places and put her in rooms with people who understand the music business at a level that most of us in Cameroon can only dream of. In the interview with RollinStone Magazine, she revealed that she lives with her manager who happens to be Ghanian. They have two studios in their house because they run a creative agency. They have video directors, photographers, sound engineers, and other artists as part of the team (let’s give it up for teamwork.)

Despite acknowledging the support of her Cameroonian community, we do not see that community playing a direct role in her development as an artist. Her parents, she says, have always been supportive with her dad serving as her manager for a short while. In a video that can be found online, we see a young Libianca performing an R&B song to a Cameroonian audience who despite admiring her seemed to be lost. I’m guessing in their minds; they were having an 80-20 debate.

When asked about her sound, she had this to say: – “I can do a lot of things. I have a lot of different genres in my vault and it’s I was very confused as to where I should go because if I can do so many things, then where is my actual lane? Over the years I was just trying to mix it all into one. Let’s just figure out a way. But I can manipulate my vocals to do whatever I want them to do really.”

That confusion she described is what many artists deal with, even though in Cameroon, it seemed to be heightened. Libianca also mentioned in the article that growing up in Cameroon, R&B music was the dominant music in her home. It is with R&B music that she started learning how to sing. It, therefore, has a huge influence on her. “Right now, I am heavy in the R&B/Afro mixture” – is how she describes her sound.

Meanwhile, there is a lot we can learn from everyone, Libianca is not your typical Cameroonian artist and should not be the yardstick for the success of Cameroonian music on the global stage.

I have written many articles in which I talk about the fact that Cameroon historically has been a country of imported cultures and it is affecting us today. As a 15-year-old Cameroonian, I could name more American artists than I could name Cameroonian artists. Is it a bad thing? YES and NO.

America is a country of imported cultures, and it seems to be doing a pretty good job of accepting and valorizing all of them – that’s for the NO. Now, the concerns of us losing our cultural identity are valid for some reason but I don’t think our cultural identity will be preserved through pop music. There is actually a reason why it is called pop/urban music – because it is supposed to try and appeal to a culturally diverse mass.

This brings us to the question of what original Cameroonian music is, a subject I have explored in many other articles. Now we claim Libianca but I don’t see the same support for T’Neeya who in my opinion is just as dope of an artist as Libianca. T’Neeya is always in Ghana doing shows but never a show in Cameroon even though she comes here from time to time to work. Maybe the lesson here for Cameroonian artists is to get a Ghanian partner (LOL).

I will not attempt anymore to answer what originality is because I have come to realize it is still subjective. We do not see people taxing Libianca for not being original, but many other home-based artists have been levied such accusations. Now we see the only reason why some are being called out for not being original is that their songs did not end up on the Billboard charts.

Stanley Enow for example won his most prestigious award with PURE hip hop songs. Not long later, he switched to Afropop saying Hip Hop does not pay in Africa. I love the man, but I have to say, he was rather in a position to continue making Hip Hop relevant instead of quitting. I really believe he could have done much to make Cameroon a supplier of Hip Hop in Africa, but what did he know? I’m sure he did the best he could do with the knowledge he had at the time.

As most artists on the continent gravitate towards one sound, we do a disservice to our future generations because they will not have much diversity to create from. This is where I can agree with those calling for ‘originality.’ Nonetheless, we must be mindful of the fact that culture is not an event in a particular place and time. It changes and we must be open to change rather than being stuck in the past. We must also acknowledge that all of us did not get the same socialization.

And sorry to break this to you, but pidgin is not your identity. It is clearly English for people who are not English. It is a remnant of colonization and not your identity. This is to say, many of the things you claim to be your identity could also just be foolishness of the past. In our cultural past, women had to cut their hair when their husbands died. Why have we abandoned that easily but want to force people to adhere to other cultural norms and values?