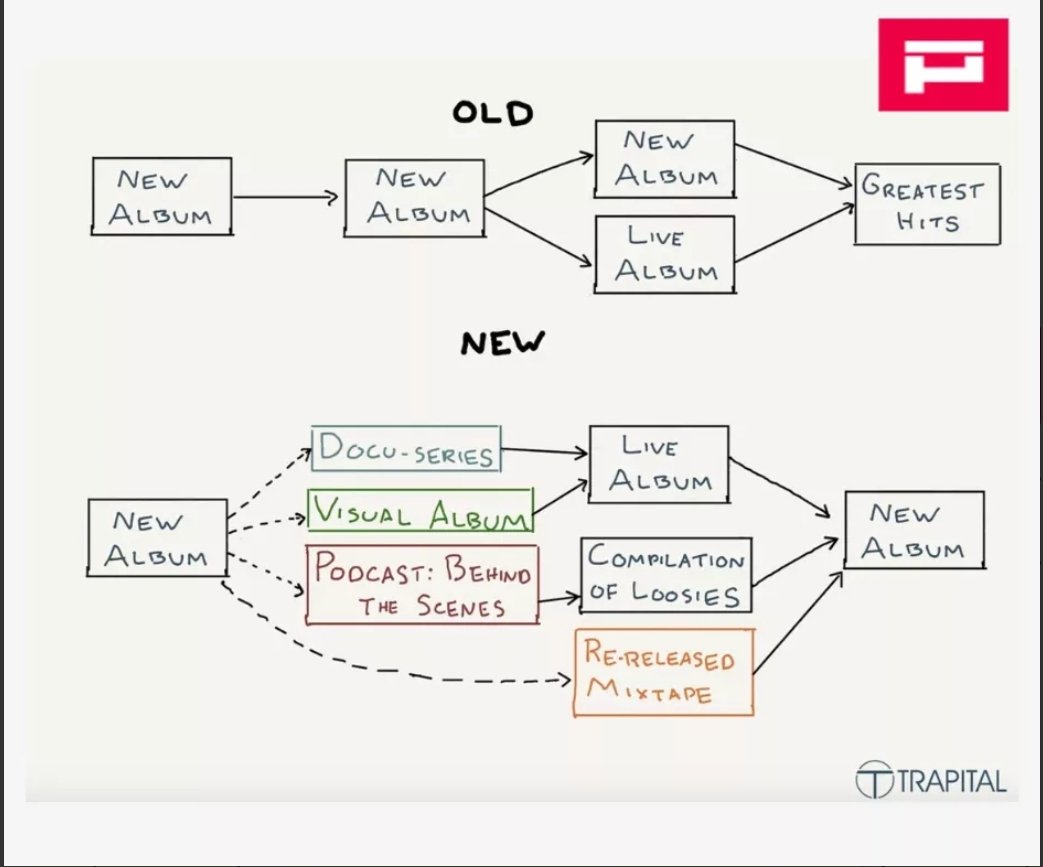 The two charts you see on the picture represent what can be said to be the old model and the new model of music distribution. Needless to say, social media and the explosion of content on social media have shaken the music industry and greatly reshaped the way music is consumed, shared and appreciated. In a weird way, it has taken power from the big record houses over deciding who should be a star and who should not. We have seen artists rise from humble beginnings on YouTube and grow to superstardom status.

Social media and the internet has also greatly brought about a new proximity between the musicians and the fans. So close are they now that 3 hours after an artist releases an album, he can already tell how his fans are reacting to it – many of them will tell him or her directly in comment sections or even in the DMs.

It is a brand new world.

But it seems increasingly that the model of the music business which relied greatly on an artist putting out a product and touring are now obsolete. Already, there has been great shift in how music is consumed. In barely 40 years we have gone from vinyl to cassette tape to CDs to mp3 players and now to streaming.

Music piracy in the late 90s and early 2000s, and peer-to-peer sharing in the mid to late 2000s ate a huge chunk out of the profitability of the music labels. They had barely adjusted to it when streaming came into force and gave them peanuts where they were eating full loaves of bread.

The music industry had had to adjust, and today we are seeing the industry relying heavily on touring, experiences, merchandising and brand collaborations. Musicians have had to transcend the “musician” tag and see themselves more and more as products; flexible products which they can position in different markets and for different purposes.

And content has had to play a great role in this.

I mean, many people were laughing at Pascal at the height of his Skrrrr TV days, but a lot of the entertainment he was doing on Instagram and Snpachat to could easily have been a well-calculated move to the release of an EP or an album that was specifically building from the content he was putting out on Skrrr TV.

Show Yoh is another person that has content on his side. Many people do not take him seriously but there is no denying he has piqued their curiosity. If people do buy his album or attend his show, it will likely be a one time thing aimed at satisfying that curiosity – thanks to the numerous content he has been putting out. I mean his whole saga with Brenda Biya was been a source of entertainment for many.

These two examples from Cameroon because are realistic, and are in tune with what is the size of the purse of the average Cameroonian urban musician. Not everyone has Stanley Enow money after all. This just means that if all you have is a phone and your internet connection, you will have to be very strategic about your IG lives, IG highlights, Snapchat and whatnot. You should be aware that you are using it to show yourself as a product for a particular market as well as engaging your followers and building anticipation for your next release.

But if we move away from our little country and we go to a powerhouse of entertainment like the USA, we begin to look at people like Beyoncé. She has the financial power and leverage to produce a great amount of content. Let me give you a poignant example.

Beyoncé released her last solo album in 2016 (Lemonade). Between that time and today she went on two concert tours; one of which was a very publicised one, with her husband. These tours were “The Formation World Tour” and the “On the Run II Tour.”

In 2018, she headlined a very much-publicized Coachella show in which she negotiated all the rights to her image. Basically every bit of her performance that was filmed belonged to her. Why did she do that?

Well she was preparing a documentary titled “Homecoming.” The documentary basically documents her journey to the Coachella performance and was released early last year, 2019. It was a backstage pass to the preparations that took place for the 105 minutes performance at Coachella 2018.

Please, if you are in the entertainment business, do your best to watch that documentary. You will discover the extent of Beyoncé’s professionalism and that of the team that accompanies her. No doubt you will get inspired.

Later in 2019, the “Lion King” movie was released and we learned of a new Beyoncé project that featured the best musicians and producers in Africa –according to her. Amongst whom featured our very own Salatiel.

And days after the album was released what piece of content did Beyoncé release? A short, 40 minutes documentary called “Beyoncé: Making The Gift.” The documentary documented the collaborations that went into creating the ‘Lion King: The Gift’ album.

And in August 2020, she released a visual album for the ‘Lion King: The Gift’ album

So between 2016 and today, Beyoncé has released one solo album, one collaborative album, two documentaries, one visual album and two concert DVDs. That is SEVEN unique pieces of content amongst which is just, again, ONE solo album.

One solo album in 5 years and all this time we have had Beyoncé in our faces. Putting aside her personal aura, if Beyoncé drops an album tomorrow, there is no reason why even the most fervent Beyoncé sceptic would not want to consume it.

This seems to be the new way in which the music business is shaped and it’s either you get along with it or lag behind. If you are not going to do so, then you better have Ed Sheeran or Richard Bona talent. That is the only way you are going to survive.