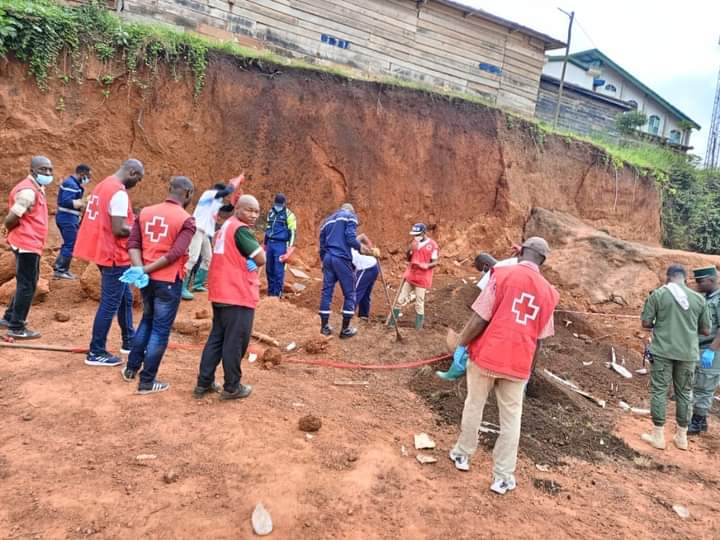 FINAL FIGURES OF YAOUNDE LANDSLIDE SET AT 15 DEATHS, AND 4 SURVIVORS

The government of Cameroon has placed the number of deaths after Sunday’s landslide in the capital city, Yaoundé, at 15. Primary victims of the landslide are mourners who were at a funeral when the incident happened in Damas, Yaoundé III subdivision.

The Centre regional governor, Naseri Paul Bea on Sunday evening, had placed the death toll at 14, shortly after visiting the scene. “The landslide killed 14 people. Over 10 others have been taking to the various hospitals. We are carrying the corpses to the mortuary of the Central Hospital” he had told reporters.

Two days after the incident, Territorial Administration Minister, Paul Atanga Nji has declared that the official death toll is now 15. “The search carried out by the Fire Brigade, forces of law and order and teams of the Civil Protection Department, with the support of the population, led to the extraction of 15 corpses from the rubble,” he stated in a November 28, 2022 press release.

The corpses, he added, remain at the Yaoundé Cnetral Hospital where identification is ongoing. Regarding the number of survivors however, the Minister’s figure differed drastically from the initial 10 cited by Governor Naseri. “Four (04) injured persons were formally identified. They are currently receiving medical attention at the Yaounde Emergency Centre (CURY) and Efoulan District Hospital,” he declared, adding that investigations are ongoing as the site remains cordoned off from the public.

One of the survivors of the disaster was 30-year-old Fotso Claude, reported by The Guardian Post newspaper to have lost his mother, bother and an uncle. Speaking to newspaper, he said he was lucky to have been pulled out after the rubble had covered him to the waist level: “I left where I was sitting under the canopy and went to the centre of the field, Moments later, I saw a stone coming down. When I took up my head to look closer, I saw a pile of ground collapsing towards me,” he recounted.

Unofficial sources it should be noted, had reported higher figures, with some suggesting even up to 40 persons lost their lives.