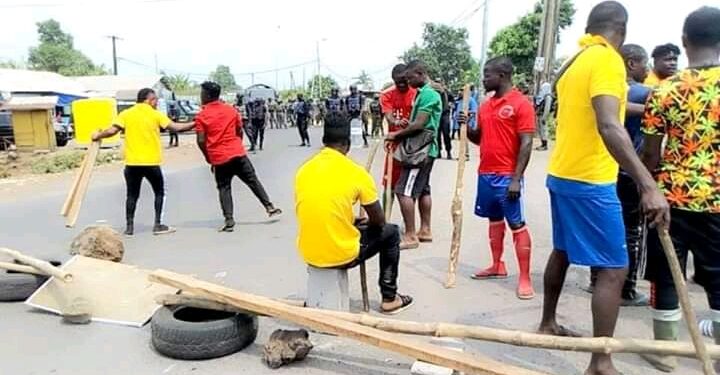 Naseri Clovis, an inmate of the Buea Centre for Disarmament, Demobilisation and Reintegration (DDR) of ex separatist fighters, is nursing his wounds after being beaten by fellow inmates. Going by videos making rounds on social media, he was tortured to the point of bleeding by them, before being made to appear on camera.

Naseri Clovis since handing himself to the authorities and being admitted into the DDR Center, has been on many trips alongside security officials, cautioning separatist fighters to drop their arms and join him and others. They have been brandished by authorities as an ideal way to go for fighters willing to repent. Yet, the love and unity preached about in the center, appears to be on the rocks.

In the videos making rounds online, fellow inmates can be heard in the background accusing Clovis of calling blackmail. Another said Clovis told pro government social media influencer, Kontri Man, all them were thieves. Kontri Man in question runs My Kontri People Them, an extremist social media page that clamours for the termination of separatist fighters that deny surrendering to the DDR Centers.

“Kontri Man isn’t the one who brought us here, our father, Paul Biya did,” one of them is heard saying in the clip.

“You told Kontri Man all we here are thieves. Clovis, am I a thief?” yelled another before hitting him in the head. In another clip, they are heard compelling Clovis to pull out his phone and do a live video, refuting earlier claims he had made about them. Clovis has since reacted the incident, confirming that he was attacked, and is currently in hospital. He further promised to clear the air later.

Reacting to the incident, Frankline Njume said it was disturbing and should be looked into: “that scene … calls for immediate attention from us all, especially those directly responsible for the security and wellbeing of Okha Clovis Naseri,” the regime fanatic wrote.

The DDR Center on its part, is yet to provide any reaction to the incident believed to have been carried out within its walls.

This is not the first time the DDR Center is coming under scrutiny for the alleged misbehaviour of its occupants. In February 2021, inmates of the center staged a protest decrying what they termed inhabitable conditions. They also chided authorities for not hastening the process of providing jobs for them upon completion at the center.

DDR Centers As of March 2021, the DDR Centers in Buea, Bamenda and Mora had a total of 651 inmates, all from the armed conflict in the North West and South West regions, and the war against Boko Haram in the Far North.

THE ART OF STARTING OVER 0