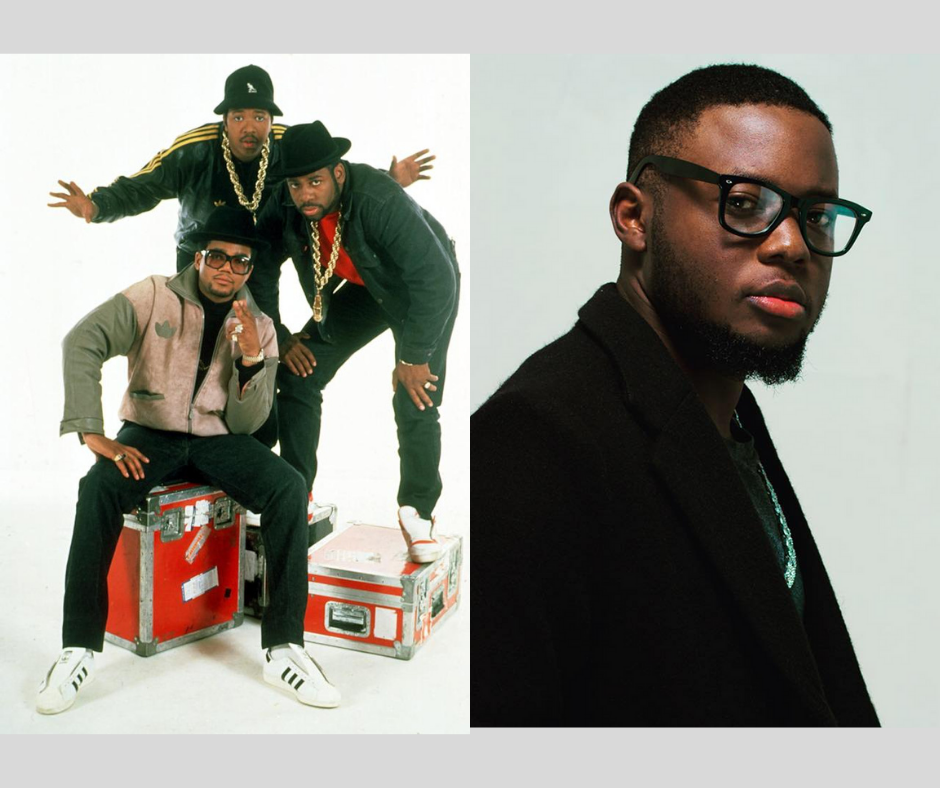 Run-DMC was hip-hop’s very first superstar, commercially-successful, music group. They burst onto rap the scene in 1983 and made the first really big splash in the overall hip-hop culture. Two things made them different from every other rapper or rap group of the time; their music, and their dressing.

Rap music at the time relied heavily on sampling. Rappers rapped on sampled portions of Disco, RnB and Funk music. Contrary to this general practice, the Run DMC guys relied solely on the Drum Machine. The drum machine came with sounds already loaded into it. They made their beats with that and the beats had no guitars or violins or pianos like sampled records. That immediately set them apart.

Secondly, many rap groups of the time were trying to break into the disco market. They performed at the disco clubs and dressed like the RnB, disco and funk stars of the time; with bedazzled leather jackets, leather trousers, and fur coats. The Run DMC guys did none of that. They dressed instead like everyday New Yorkers: -jeans trousers, sports jacket, bucket hats aaaaand ADIDAS shoes.

They wore Adidas so much that their manager, Russell Simmons realized that they were making many people actually buy Adidas shoes. Many kids wanted to relate to them and so these kids bought Adidas shoes to emulate the RUN DMC look. Russell saw an opportunity here and saw that they had built enough clout in the market to get Adidas to sign a deal with them.

What he did next was very smart.

He made the group record a song titled ‘My Adidas’. He invited a representative from Adidas to a Run D.M.C concert at Madison Square Garden with over 20,000 people in attendance. At some point during the concert, the group members asked everyone in the audience wearing Adidas to hold it up. People took off their Adidas shoes and held it up. And then the beat of the song “My Adidas” dropped, and the crowd went wild, singing along. The ADIDAS rep was overwhelmingly impressed and Run DMC got a deal with Adidas after that.

It was the first time an athletics apparel company struck a deal with an entity that had nothing to do with athletics. This deal set the tone for the current sneaker culture and it is also moulded an essential part of Adidas’ brand which survives to this day;- the Adidas X Hip-Hop component of its brand.

The greatest hip-hop partnership (Kanye West X Adidas = Yeezy) has its roots in these early beginnings.

In Cameroon, it would appear that Ko-C pulled a similar stunt. He released a song called “Chill” in June of 2021 and featured bottles of the beer that goes by the same name in the music video. Five months later, in November 2021, he was announced as the brand ambassador of the beer brand. I cannot say for a fact if they struck a deal before the video was put out or if it was as a result of the video that the deal was struck. What I can say for sure is that the long 5 months gap between the video being released and the brand collaboration being announced makes me think it went some way. But in the absence of clear information, let us not speculate. In any case, it is not exactly the point.

The point I want us to focus on is the environment that we find ourselves in. Particularly by looking at the musicians and asking how much clout they possess to pull off a RUN DMC move, and then by looking at our business environment and asking ourselves if it is even worth the trouble. Let us focus on hip-hop, and just generally the urban music movement.

Starting with the culture, one might have to ask first, what is Cameroon’s hip-hop culture about? It is a tough question to answer.  Essentially, everything we have now that is supposed to be the culture beyond the music itself is imported. There is very little floating around as hip-hop culture that the audience can buy into – literally and figuratively. Even our most famous and recognized urban superstar has not created something that impactful that people can buy into. The Hein Pere tee-shirts worked for a while, but a lot of things that he is about today, he has copied. From the El Pelucho the teddy bear, to the Killmonger haircut. I could even mention the American accent, but that would be hitting below the belt.

Before Run-D.M.C made Adidas cool, Adidas shoes were already part of black culture. Just like PUMA sports shoes were a part of black dressing and culture at the time as well. Black people were wearing them daily already. Run D.M.C actually just elevated these in the eyes of the people because they were superstars, and by virtue of that, gave Adidas a new, fresh look –creating something new and impactful from it.

Beer is also a commodity. In fact, there is nothing that says commodity more than beer, soap and matches. But it is too general. It is generally not centric to anything unless it has specifically been branded for, and positioned in a certain market niche. In Cameroon, Mutzig is the only beer that caters to music. But its brand does not have that coolness, youth and vibrancy that hip hop has.

Chill beer has certainly not been marketed in that music niche, talk less of hip-hop. Even if one begins to ask if Ko-C is a pure hip-hop artist, there is still no correlation. And yes, all campaigns are not meant to drive sales, but can Ko-C be able to make young, Cameroonian urban music heads sustainably drink more Chill beer than they are already doing? That is a tough question, and I doubt that even the sales team at SABC can give a clear answer.

One way we can know is if a special Ko-C flavour of Chill beer is sold at a slightly higher price and the sales recorded.

As things stand, it would clearly be easier for anyone in the hip-hop market to sell something that is already part of the culture. Fashion, of course, remains the best bet. Even though, again, what we have as hip-hop fashion today is imported and the best bet is a local brand that caters to the buying power of current rap and Afropop consumers and an ambassador who is willing and patient to grow with the brand.

The only other element of hip-hop culture that transfers easily into some element of brand marketing today is the music itself. Either through concert tickets or the use of a catchphrase in a rap record or some other music genre. For example:- Stanley Enow’s “Tu Vas Lire L’heure” used by Source Du Pays, Reniss’ “Dans La Sauce” used by Orange, or Aveiro Djess’ “On Falla Le Nyama” used by the now-defunct YUP.

This is because we exist in an ecosystem where very few big brands are patient enough to invest in an artist over the long term with a clear growth strategy. Most brands capitalize on the “who is hot now” strategy to pick who they want to work with. This also makes some sense because, given the current entertainment industry, the music is usually the main driver of relevance in the market. And one cannot want to invest in an artist if they are not sure about his future musical successes or perceived long term relevance.

Stanley Enow remains an outlier and because it worked for him doesn’t necessarily mean it would work for the next person. But if we assume that Ko-C put out that video to catch the attention of the company, then it was a smart move that should give ideas to his peers. They should just know not to aim for the top companies and multinationals, but to look around at small brands with unique products and strong brand presence they can collaborate with and help grow. Perhaps, even buying a financial stake in these brands to create an ersatz certain level of commitment.

In a previous article on the topic, we wrote that “there are numerous opportunities for partnership between artists of our generation and major brands but sometimes, it takes the artists to show those companies how a partnership with them can be beneficial. Influencer marketing has huge promises for our local celebrities. They just have to be innovative in their approach to getting the attention of brands.

Brands are desperate to be part of the culture and unfortunately for most of them, their marketing teams are disconnected from the culture so they have to rely on artists to tell them what the people are talking about.”

You just have to make sure you are strategic about how you are going to play that hand, so you don’t end up making a free advert for a brand.