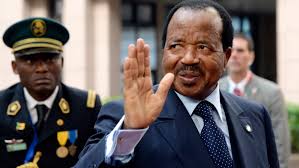 Cameroon’s President, Paul Biya has praised his administration for what he said was its ability to absorb shocks incurred in 2022 in different domains.

The head of state in his 2022 end of year message to the nation this December 31, 2022 cited the Covid-19 pandemic, the war in Ukraine and the global trade system’s dysfunction as some sources of challenges this year.

These, he said, led to among others, unprecedented price hikes, fuel shortages and water shortage across the country.

“despite this challenging context, our economy was able to adapt to the international environment, once again demonstrating resilience, with an approximately 3.8% uptick in growth rate as against 3.6% in 2021,” he stated.

He further cited other moves by government including subsidizing fuel and cooking gas to the tune of nearly 700 billion and 75 billion FCFA respectively.

Over the past years, the head of state often dwelled on political challenges plaguing the state, as well as health during the Covid-19 period. In his 2022 end of year word however, he spent more time elucidating infrastructural development initiatives planned or currently underway across the national territory.

2023, he promised, will be marked by among others, three large-scale projects aimed at developing the country’s mining sector, structuring the economy, and creating jobs. The initiatives include the Kribi-Lobe iron ore enrichment plant, exploring the Mbalam-Nabeba iron deposit, and exploiting the Bipindi-Grand Zambi iron ore deposits. “A decisive step has been taken in implmentning these prjects,” he announced, citing the signing of the necessary paperwork.

President Biya also made a series of promises regarding government action, with regards to scaling up energy supply, and addressing Yaounde’s water scarcity. Among them, is “the commissioning of Phase I of the Nachtigal Hydropower Dam and he commencement of work to connect the South and North Interconnected Grids.”

With regards to road projects, President Biya admitted the need to pay closer attention to urban and road network. “I have instructed the government to do all it can to ensure the resumption of construction work on the Mora-Dabanga-Kousseri, Bamenda-Babadjou and Kumba-Ekondo Titi road sections.”

“The rehabilitation and modernization of the Tiko, Bertoua and Kribi airports will also be prioritized to ensure that all regions of our country are served by air transport,” he went on.

Citing the elephant in the room – security, President Biya admitted that the situation is yet to return to normal in regions facing unrest. The relative calm witnessed however, he stated, has been of great benefit to the reconstruction plan for the North West and South West regions.

He also thanked Cameroon’s partners “for their multifaceted support, and particularly, the United States of America for its decisive action in prosecuting those who help to finance terrorist activities in Cameroon from abroad”.